Manny Many Prizes with Frances Pascua

Last Saturday, I brought my new found friend Frances Pascua to the live show of Manny Many Prizes. I picked her up from where she was staying and would you believe I got lost and ended up going the wrong way. Instead of heading north to GMA, I was on the south bound heading back to Ayala. WTH right? But I remembered there was a u-turn somewhere near Buendia so I was back on track.

Traffic was terrible! I was afraid we were going to be late when I wanted to get there early to get more chance to talk to Manny. We arrived about 20 minutes late and to top things off, my mom’s friend wasn’t around. Oh no! I saw a guard and asked him if he could find us seats, and he did.

Some staff were in the way of our view but it was okay. We could still see what’s going on in the stage. After a few minutes, it started to rain. Grrrrr. We ran under the tree near us but when the rain started to pour, a guard led us to the tent behind the stage. Apparently, people weren’t supposed to be there because we can get electrocuted from the wires and stuff. After a while, the guard went to get an umbrella and escorted us to another tent on the other side of the back of the stage. We composed ourselves and waited for a few more minutes then ran inside the GMA building when we got the chance. I was soaked! Fortunately, Frances only got her hair wet. I told her that we should just wait inside because the show was almost ending anyway.

Finally, I got to introduce Frances to Manny. And then Sam Pinto was there too and Frances asked to have her photo taken with her. 😀 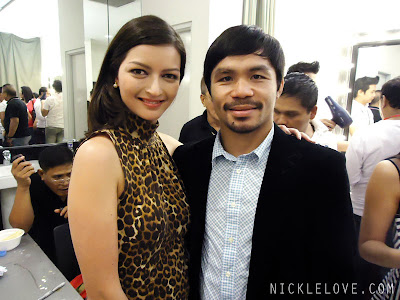 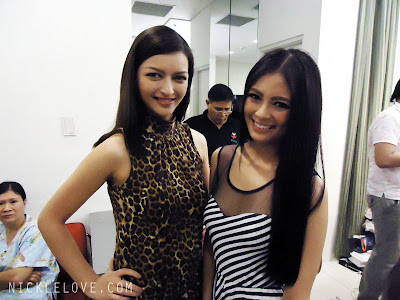 We had dinner in Mang Inasal afterwards. No pictures. I was starving. LOL